OK this page has plenty on pics, so the format was changed slightly & thumbnails were created. So just click on 'em to take a look @ the bigger pic. Great thanx go to Dave for his patience in capturing the pics, & then transfering them from video to Jpegs so U all can see them.

Here we have a work in progress. This is Marco's largest piece so far, & it is taken from the reprint of Drew Hayes' Poison Elves #1 (Sirius) [Not that JML's cover is bad, but Drew's is meaner].

Why I say in 'work in progress' is cos so far only four hours of work has been applied to the tattoo on the 10th of January 1998, & @ least another 12 or so hours will be needed to complete it. 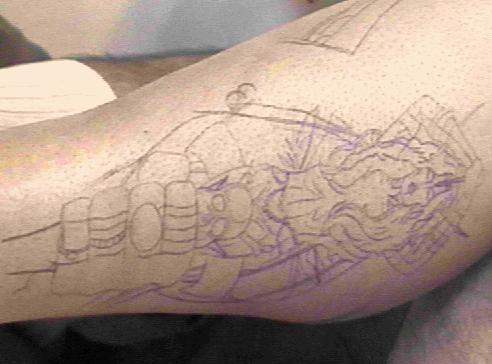 This is the shaven leg w/ the traced transfer on it that will make the basis for the outline & then farther work. 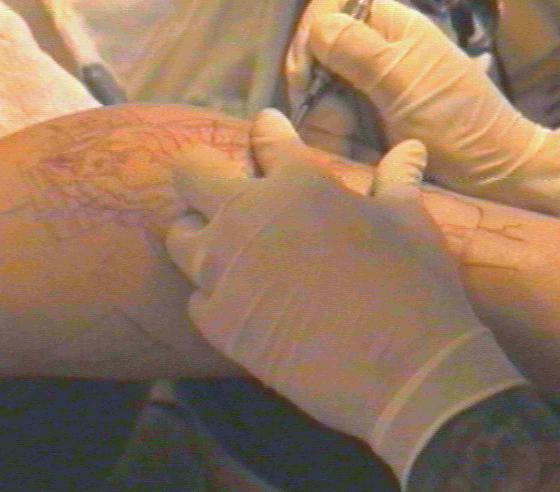 This is Anthony 'Ant' Simmons (the Artiste) @ work on the canvas of Marco's Leg. Ant was working @ 'Rudy's Tattoos Hatfield' in Pretoria, ZA. Now having opened his own studio Phoenix Tattoos.

The preliminary outline has just been completed, in a light grey, so that it can be a guideline to follow for the 'black' linework & the shading that doesn't require any lines. 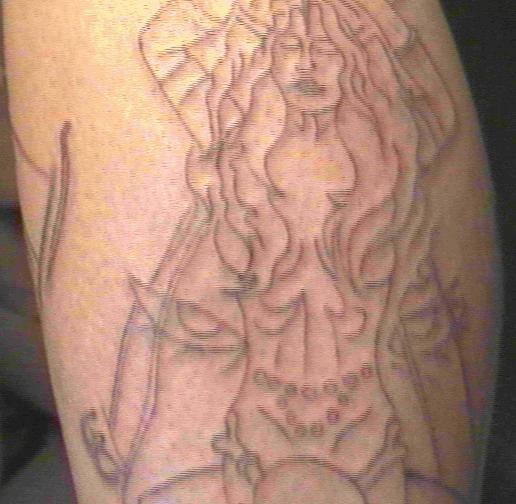 & here's a real close-up of the hilt & eyes, I know it's a bit fuzzy but it's more to show the detail that's going into the tattoo than anything else. 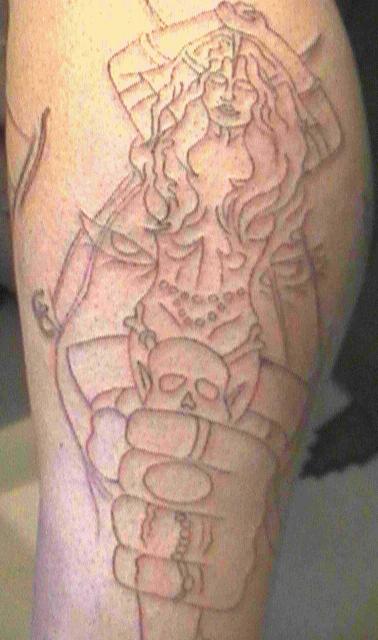 Same pic again, but w/ the fist clenching the blade. Notice the welts that have formed around the line... looks painful huh? 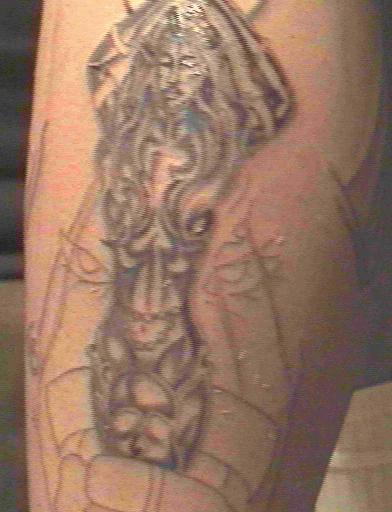 The hilt has had some shading done to it now, & U can see it starting to 'blossom'. & the glossy stuff up top is the plasma starting to flow. 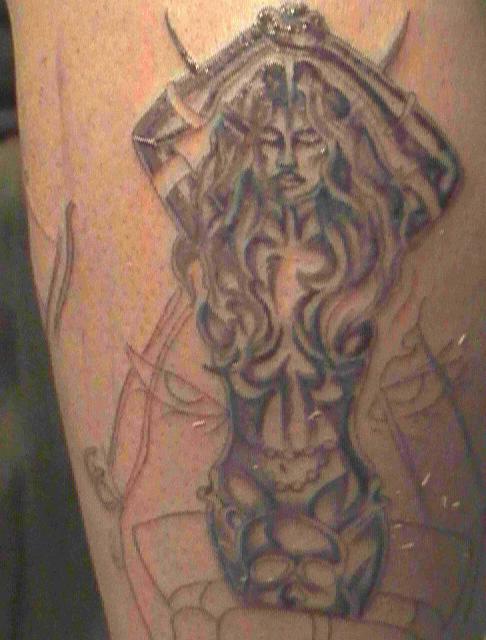 A nice close-up so U can see the detail in the shading. 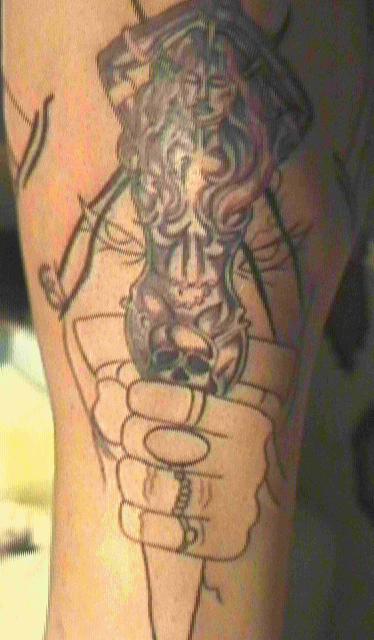 The entire tattoo once all the shading that was done was complete. OK & if U look closely @ the right eye U'll see that the hair miraculously skips thru it..... but that was sorted out after the pic was taken. 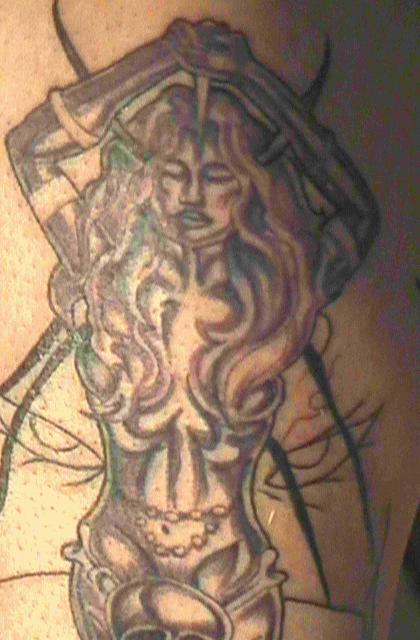 Another close-up of the completed (so far) shading. What U think? Nice or what? This is the same pic w/ a bit of a different accent on the colours.

On the 21st of March 1998 a second sitting was done @ 'Skin Inc.' in Pretoria, which is a division of 'Rudy's Tattoos'. Work was done on the gloved hand, the eyes & the ears (which you don't really get to see all that well in the above pics, but they curl around the leg quite nicely).... Greywash was done on all of the above & fuck does it look good. The blade & the cross-guard have been done in a chrome finish (ie: from brown to golden brown to gold to blue) & it looks real! The eyes also had some white put in (U know, the white of the eye part) & the irises are blue. Um... what more can I say???? Oh look for yourselves. 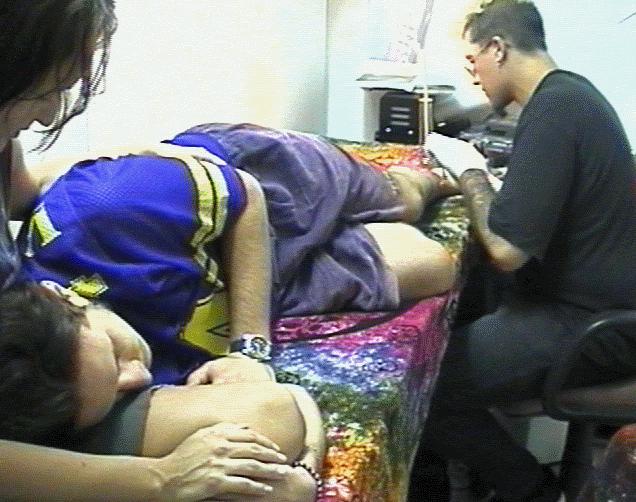 Here U see Ant hard @ work on Marco's leg, w/ Marco not squirming around for a change.

This is the ear on Marco's shin. & the greywash certainly gives it that really 3D effect that Ant's damn good @. 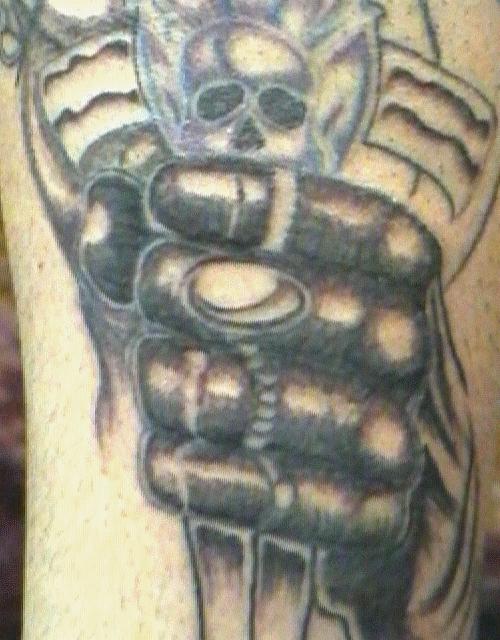 Here is a nice close-up of the shaded glove, see what I mean about the 3D effect? 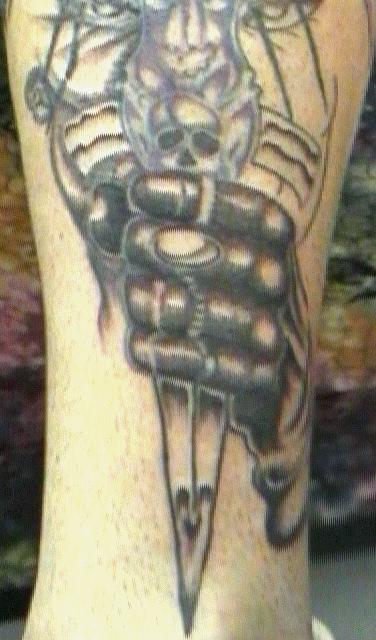 A slightly more zoomed-out view of the glove & dagger, & now U can see the wrist part too. 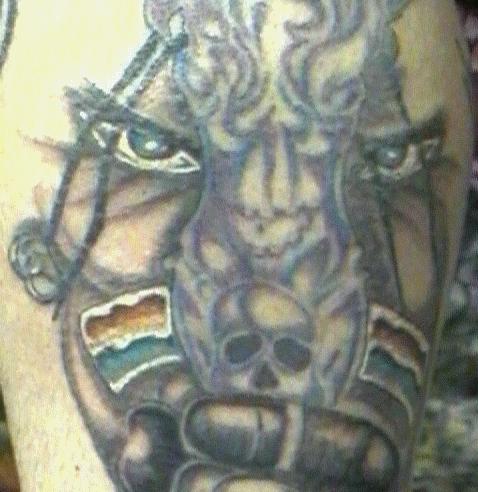 A nice close up of the eyes & the shading around them. & the crossguard has been chromed too. 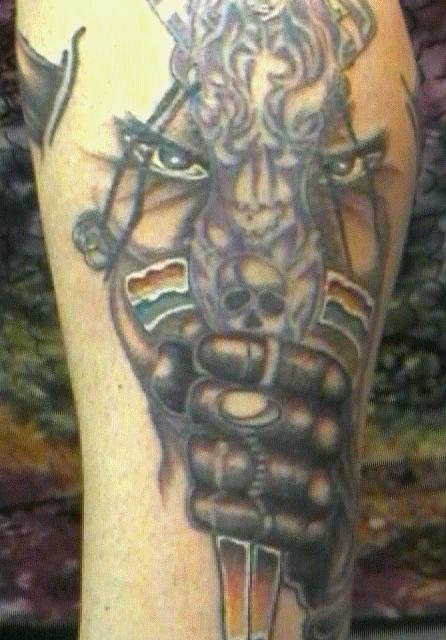 OK here's what the leg looked like after the second sitting. All the metal (blade & crossguard) have been chrome finished. The ears & face have been greywashed & the eyes coloured in. The glove was also shaded & wrist piece added.

On the 11th of April, Marco went for a third sitting to get started on the hair.... & What he didn't realise was, that he was in for a whole lotta linework, as in the outline of the hair & Ant wanted to touch-up all the main lines on the existing work. 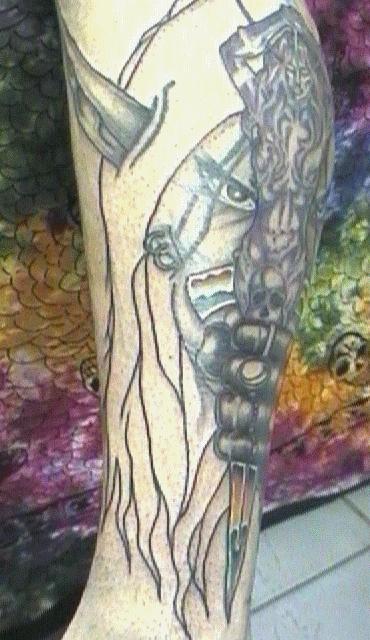 Now U see those lines in ink format, & all the other outlines have been touched-up too.

A view of the rear of the leg, same linework as before, but a few extra lines were added after the pic was taken (to fill it out more). 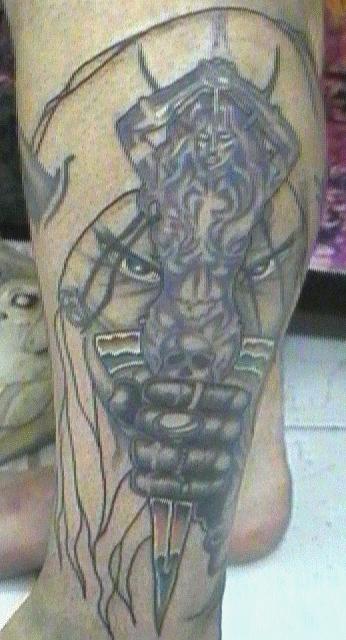 Now U get a full facial view of the leg w/ the hair outlines. 'Look deep into my eyes & U will see who I am, my name is "Lusiphur" please take my hand' Now tell me those don't look real. & the white has been added to the hilt too. 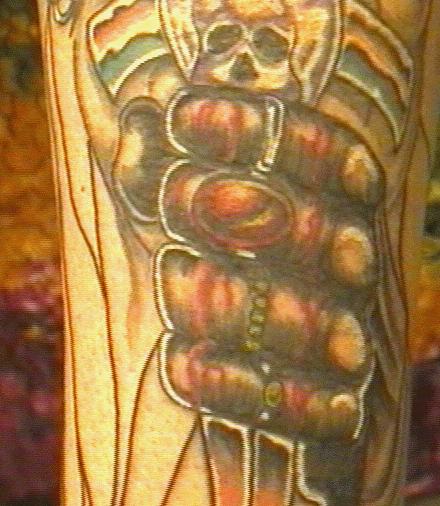 The rings & jewels have been done. & the blood oozing thru the fingers looks yummy. 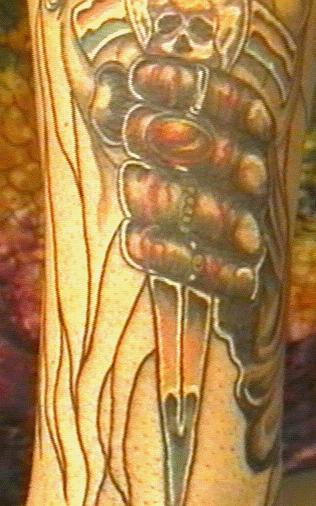 I guess cos U can't actually see the ankle bone, U won't really realise how far down those tendrils of hair go, & how painful they were to have put there. A nice fullish view of all the work done so far. The lighting was better @ Dave's place, so this pic was taken there, about an hour after all the work was done.

On the 2nd of May Marco got the brown added to the glove, so it now has an authentic leathery look to it. & if U recall I said "& then there's the most painful & largest piece to do last.... the hair that should sleeve most of the leg" Well half of that was done & it wasn't nearly as painful an anticipated. A 'magnum' (seven needles; two flat rows of needles one above the other) was used, & it gives the hair a real 'strandy' appearance & is ... not much I can really say, U'll just have to see for yourselves when the pic is up.

& NOW..... It is finally complete... the colouring in of the hair on the back of the leg was done on the 23 of May 1998. This was by far the most painful part to have done. I guess this is cos the calf muscle has plenty of nerve endings & they don't take too kindly to being attacked by needles. All in all the pain was definitely worth it as the final result will testify. Pics will be up as soon as Dave's PC is up & running again, & Marco returns from his 3 week journey to the UK.

OK the above has all been done, but Marco still hasn't been able to get Dave to get a shot of the tat. So the one that is going up for now is the pic that Drew shall have in hand. It is way dark, so sadly the colour & finer detail doesn't come out as well as it does in sunlight. So as soon as Dave gets a shot of the tat that'll be here too.

Marco has just recently started a new PE character Parintachin (sketch courtesy of , thanx dude) & went for his first sitting on the 4th of December 1999. A pic of the chop is the one below. 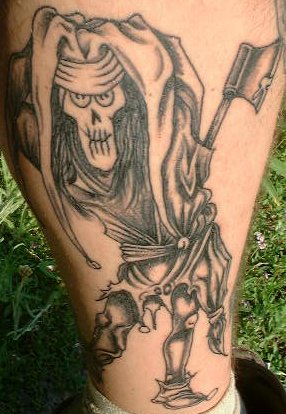 This is another of Ant's (Phoenix Tattoos) masterpieces, all the above was completes in 2 hours & Marco says is didn't hurt a bit.

This is a tribal designed by Candice (Ant's wife & co-owner of Phoenix Tattoos), & lovingly applied by Ant in December 1999. 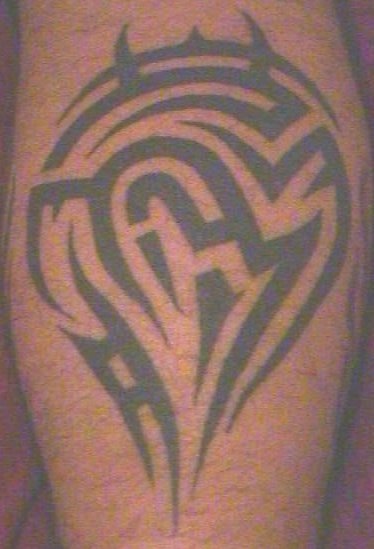 Also added in February 2001, on the same day infact, designed by Ant.

The next 2 tattoos are others that Marco wears around all the time. They were originally done by a friend of his, Chris, but have since been touched-up by Ant, who did a much better job of them. Ant added some red to the original tribal & filled in all the negative space in December 2000.