Tamlyn is our first female member... & don't let this fool U. She can play w/ us boys & give us the sound we want... & no I'm not being demeaning, it's just quite easy to notice a voluptuous brunette on stage & I just thought I needed to bring that to your attention.

She played her first gig on the 4th of September 1998 where we debuted more than just a new bassist. Along with the 5 new songs we played, she was very well recieved & did us proud. She also played the first bass solo that we've ever had in one of our songs, it's called 'The Hand That Feeds'.

The band already loves this girl.... She just postponed a weekend away so that she would be able to play her second gig w/ us on 18/9/98. Now if this is something to go by, then we are fucking happy to have her aboard.

She has now gotten over her initial stage-fright & is actually moving around on stage & headbanging while playing. I guess a weeks worth of gigs in one weekend [w/ 'Cryo'] can cure anything.

Tam turned 21 on Monday the 5th of April 1999, making her the youngest member in the band, almost 5 years younger than Marco. Happy B-day baby.

18th December 2000
Two and a half years of complete & utter dedication to P.I.T.T. is something that we'll never forget about Tamlyn, but owing to some pretty extreme medical reasons she isn't able to play bass for more than a short while @ a time, & feeling that she's hindering us by not being able to practice as hard as she used to & keep up with the newer/faster songs, she's bowing out of P.I.T.T. She'll be sadly missed, especially since we were really hoping to take her to the UK with us next year. But alas, we can't always get what we want, & we've learnt to deal with that.
She played her final gig with us on the 16th December, where we launched our debut album "Forced Disillusion".

That's all for now, but I'll be back to update this as soon as I have anything to add.

Tour of Duty: Tam was our longest standing bassist we've ever had. She played bass for us from August 1998 'til December 2000. 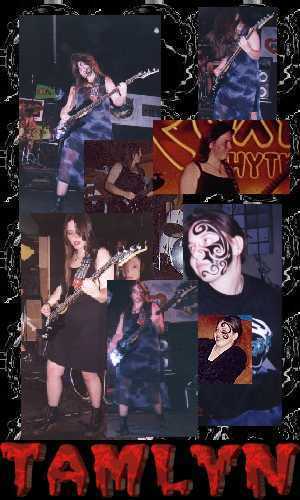